As a longtime committed social activist, I focus my work on social justice, urban revitalization, and our current environmental crisis. My work has evolved from an inquiry into the nature of my materials. Paper has provided an ongoing exploration for me: its outer fragility and its inner strength, its apparent simplicity and its structural complexity, its capacity for both hardness and softness intrigue me. Instead of using paper simply as the surface to receive an image, I have developed a vocabulary of manipulation techniques such as tearing, folding, layering, peeling, crushing, etc., which enable me to utilize paper as a kind of drawing and sculpting material. 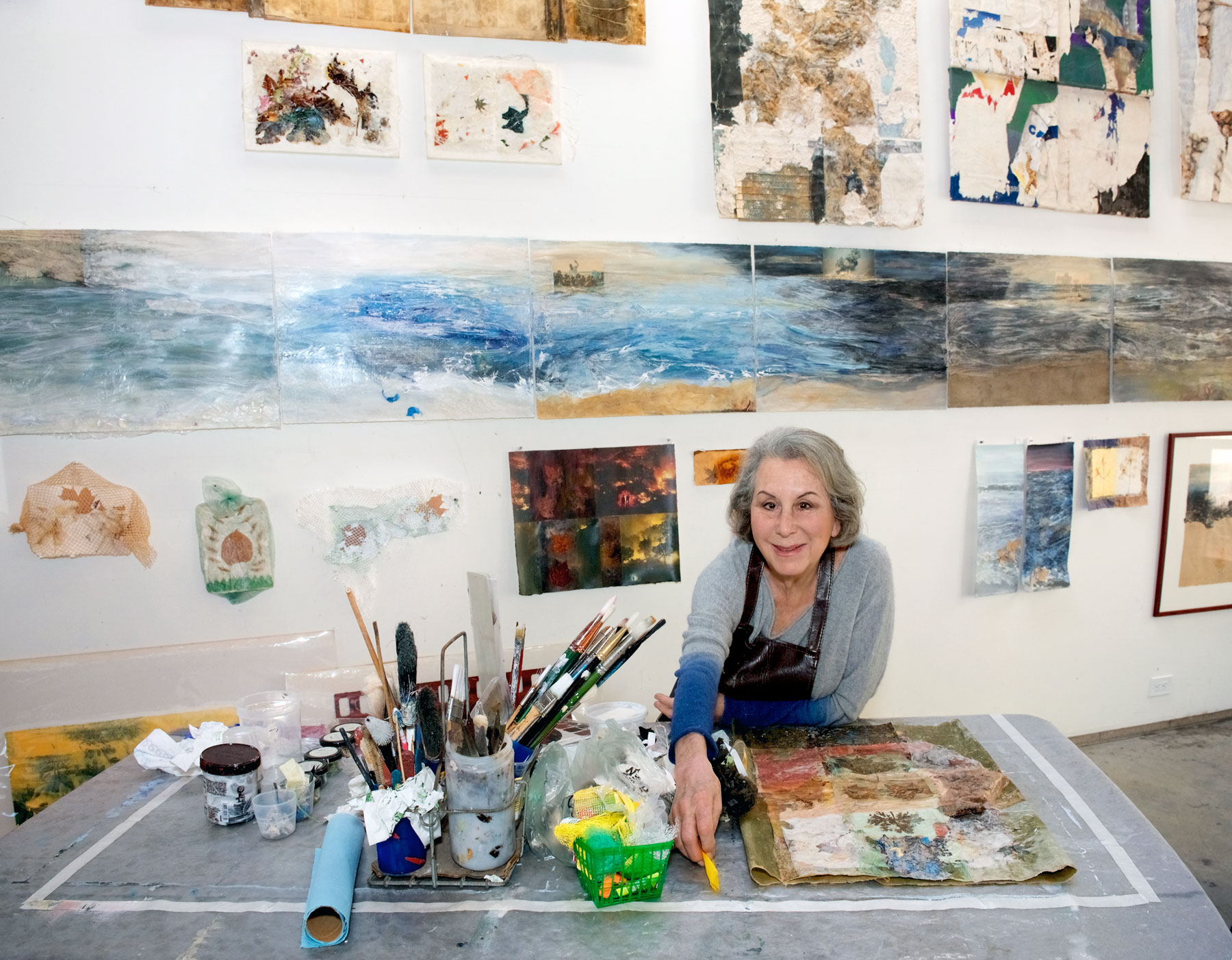 Sandy Bleifer’s signal contribution to contemporary artistic practice is her overall employment of paper towards a variety of subjects and effects. But over the years Bleifer has engaged this employment in the consideration of diverse subjects, and to regard her simply as an innovator in paper is to miss the deeply felt and conveyed meanings of her artworks, the worldly concerns that motivated their production in the first place. Her various series are in fact collections of thoughts about life, like the pensées of a memoirist, perhaps, or the musings of a poet. The only difference is, they are made of paper rather than written on it.

The artist received her B.A. in Fine Arts at UCLA in 1962 and worked as an Artist in Residence for the Beverly Hills Schools and Central High, a continuation high school in downtown Los Angeles, as well as an art teacher, docent and publisher of curriculum materials in the arts.

Under the aegis of Space, a seminal Los Angeles gallery under the direction of Edward Den Lau, she exhibited and sold her work from the early 1970s through 1997 at many galleries and museums including the Downey Museum of Art, University of California, Berkeley, Loyola Marymount University, Mt. St. Mary’s College, the Craft and Folk Art Museum, Riverside Art Museum, Chapman College, Palos Verdes Art Center and the art rental galleries of the Newport Harbor Art Museum, the San Francisco Museum of Art, and the Los Angeles County Museum of Art.

Her work is included in the collection of the Albuquerque Museum of Art, New Mexico; the Kitakamakura Museum, Japan; and in many private and corporate collections including those of ARCO, IBM, Faberge, Neutrogena, and Security Pacific Bank. She is included in a recently published encyclopedia of Los Angeles artists before the 1980s, by Lyn Kienholz. In 1975, the City of Los Angeles commissioned her to paint a mural on the Hayvenhurst underpass of the Ventura freeway. It can still be seen there and has been included in the definitive compendium of mural art in Los Angeles, Street Gallery by Robin J. Dunitz. Long a social activist, Bleifer concluded a six-year project to present her Hiroshima/Nagasaki Memorial Project to audiences in the U.S. and Japan in 1995.

Since then, Bleifer has continued to expand her emphasis on social and environmental issues – producing new bodies of work and incorporating new materials. She has supported the efforts of several peer groups and organizations such as Workshop, i.e. in Santa Monica, Venice Artblock in Venice, ViCA (Venice Institute of Contemporary Arts), JAI (Jewish Artists Initiative) and LA Artcore Gallery downtown. She has been juried into exhibitions at the Orange County Center for Contemporary Art, twice invited to exhibit at Works on Paper (the Annual National Juried Exhibition) at the Brand Library in Glendale, exhibited at Connessione Oltre Confini International Juried show in Rome, Italy, and in Venice Here and Now at Beyond Baroque in Venice, California, and the University of Southern California’s IGM Art Gallery. Her work is in the permanent collections of the University of Southern California Medical Center and Good Samaritan Hospital.

Bleifer’s work in community is as much a part of her artistic practice as is her studio work and she aims to utilize her art to mobilize others. As a Los Angeles native, she has a strong attachment to certain places and neighborhoods and a sense of what makes them special. 1995 and the culmination of her Hiroshima/ Nagasaki Memorial Project was a turning point for her artistic and social practice. Having orchestrated that major project, which included poetry and performance, community and educational programs, and framing a difficult subject for audiences in both the US and Japan, Bleifer was empowered. When she saw landmark properties in downtown Los Angeles neglected, she committed to reinvigorate them with new purpose. She immersed herself in the social and political dynamics in order to project a vision for renewal. Bleifer operated two art galleries downtown as a strategy to reveal the potential of the buildings and the neighborhood. She sought out developers and tenants to stimulate a dormant neighborhood with arts, education and culture, and she produced two books of her photographs to give a new perspective of these treasured properties. Her photographs of the historic downtown buildings are now archived in the Los Angeles Public Library, and her documents and correspondence generated throughout the process are archived in the University of Southern California’s Los Angeles History collection.

When the historic, pedestrian-only, residential Walkstreets of Venice were threatened with obliteration for better vehicular access, Bleifer organized her neighbors to preserve them. These efforts are documented in her publication Saving the Venice Walkstreets and were featured in a local exhibit in Venice.

For the past 5 years, she has sought support for her vision of a neighborhood arts “colony” that would include affordable live/work space for Venice’s dwindling artist community.

As Bleifer continues to confront new concerns, she adds materials to her toolbox, such as plastic waste, newspaper clippings, and digital printing – juxtaposed with leaves, sand, and paper – with the goal of provoking an audience to consider issues of social and environmental justice.

USC has hosted two important exhibitions of my work at the Institute for Genetic Medicine Art Gallery: “Natural Unnatural Transformations” in 2005 and “The Hiroshima/Nagasaki Memorial Project” in 2010.

All of my work is an exploration of paper and its expressive potential to serve as a metaphor for nature, the built environment and the human condition. Media include silkscreen, collage, acrylic, oils, tar, wax, art papers, industrial materials and handmade paper.

The works at the 2001 Soto building span the full range of my subject matter from the Constructed Silkscreens of the ’70s as commentary on the landscape and the forces of nature to more dimensional works of the ’80s and ’90s with the use of paper mimicking rocks, tree bark, leaves and walls. The works are intended as a form of social activism illuminating themes of the environment and its degradation.

I hope patients, staff and visitors are as pleased with the installation as I am. Good Samaritan Hospital was there for my sister many years ago when she was in a terrible automobile accident. This is a way for me to show my appreciation for the excellent care she received and for her recovery to lead a full life afterward.